"Pack an extra bottle of water, and say your prayers" was the advice from our waitress as we enquired about the section that lay ahead in the Sandhills traveling north to Valentine, NE.  As we finished off our burgers at Paul's Liquor and Food in Mullen NE, an interested patron pointed out that we could always drink from the stock pumps. He has all his life and he's just fine.


These windmill pumps supply thirsty cattle with a cool endless stream of water throughout the Sandhills. Just a note of caution, collect the water as it comes out of the pipe.  Don't drink from the trough or pool itself.

Nebraska is known for corn and beef cattle but it might as well be recognized for great cycling.  RBA Spencer Klaassen mapped out and guided us through a 1,000k adventure that highlighted the Sandhills but included varied terrain from vibrant wetlands teaming with wildlife to a near alpine climb up to over 4,600ft elevation at Piney Ridge. 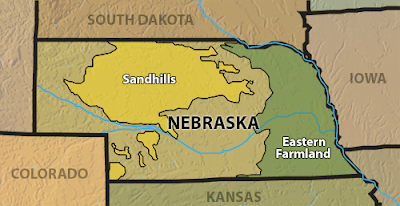 This inaugural edition of the Sandhills 1,000k included 8 riders from 7 different states who came with eyes wide open to capture the panoramic views.  Riding in Nebraska may not be on too many bucket lists, but it should be.  The sparse population density results in nearly empty roads.  We completed a 100k night section and didn't see a single car.  That section from Alliance to Hyannis parallels the railroad, which is a major east west route with trains passing every 10-20 minutes.  Train horns work better than caffeine to keep the weary randonneur alert.

The south/north direction through the hills is significantly more challenging than the east/west.  Even the "busy" roads carried very little traffic but provided a wide shoulder protected by rumble strips.  The road surfaces were mainly smooth although some extended sections include frost cracks.  Something to consider when choosing tires.

The night sky was mesmerizing, particularly from Valentine to Merriman up near the South Dakota border.  The sky stretches from horizon to horizon with essentially no background light pollution to obstruct your view of the Milky Way.  I found the rumble strips more than once, as the night sky was demanding my attention.  At one point I just stopped to look at the sky.  It was that special.

In addition to the natural beauty the route included cultural sites as well, including Carhenge, the world's smallest courthouse and the only straw bale church in the US.

Challenges of the ride include long sections of hills, lack of shade, wind, storms and limited services.  Debe and Rick Dockhorn provided roving camper support at key locations of extended sections without services.  Volunteer Billy Coates adeptly managed our drop bags and coolers and staffed the overnight controls.  The absence of a motel in the optimal sleep stop after a long day one did not deter Spencer as he cold called the local bank and arranged for us to rent out a house from the mother of one of the employees.  They even provided breakfast burritos and monkey bread!  The fee? "Leave a donation of whatever you think appropriate."  Who rents their house out to complete strangers that will arrive after 1 am and be gone by 7am without settling on the cost? Oh, and provides breakfast.  Nebraskans do.

Corn Huskers are a friendly bunch.  They were genuinely interested in what we were doing and in our safety.  On the road they always pass with care, mainly in the entire opposite lane.  Off the road they shook our sunscreen soaked hands, asked many questions and even let us fill water bottles in their kitchen sinks. At mile 575 as we entered a Sinclair station I held the door for a woman and her daughters.  They started a conversation and wanted to know all about our ride.  When I told her that our destination for the night was Broken Bow she got a concerned look and asked if I thought we would miss the storms.  I hustled inside and Spencer pulled up the radar. It did not look good.  We were in the direct line of fire.  Every single person that came into that station advised us to stay put.  A storm was heading our way with 65mph winds, hail, rain and it had already spawned one tornado in Oshkosh.  We sat at the large plate glass windows and watched the storm come through led by a wall of dirt that was being pushed along.  It was impressive and mainly passed in 30 minutes.  When we returned to the road a full double rainbow greeted us!

Perhaps you are familiar with the "bystander effect".  This is the psychological phenomenon that has documented that people will not intervene in emergencies due to diffusion of responsibility.  This is not in effect in Nebraska because there very well might not be someone else to help.  I'm convinced this is why we had so many people tell us to stay put at the convenience store. Our group had the good fortune to include a native Nebraskan, Rodney Geisert.  He grew up on a farm in Kearney, not more than 30 miles off our route at one point.  He recounted a story of a neighbor farmer getting his hand trapped in a piece of farm equipment at harvest time.  He wound up with a significant injury and was admitted to the hospital.  Rodney's father and several other farmers drove over in the combines and harvested the injured farmer's crops, before their own.  That is what it is like to live in an area where you rely on others.  They watch out for you too.

Rick Dockhorn from Lincoln NE contacted his aunt and uncle who live in Broken Bow, our start/finish town.  They offered to provide a pre-ride cookout at their home a short walk from our hotel.  We stuffed ourselves with flame grilled burgers and dogs and heaped on the homemade sides.  A local sampling of microbrews completed the festivities.  Our names, home towns and occupations were gathered for a story in the local paper.  I'm not sure if Nebraskans love cyclists or they just love people.  It doesn't really matter though.  You are sure to be welcomed with open arms.

The ride is challenging.  Although the climbing total was only a little over 18,000', it feels like much more because often we were climbing into the wind.  The weather will definitely come into play.  Make sure you have a good radar ap on your smart phone.  Ensure that you are receiving severe weather warnings.  Go up one tire size from what you normally ride if it is less than 28mm.  An extra water bottle is not necessary but could come in handy.  High SPF sunscreen is mandatory as you will be in the sunshine nearly constantly.  Sun shade arm and leg warmers/covers would be ideal.  Shade is not a thing in Nebraska.

I feel fortunate to have been a part of the inaugural Sandhills 1,000k.  It is truly a unique area of the country to ride a bike.  The lack of auto traffic is conducive to extended smiling.  You may have never considered riding in Nebraska.  You should reconsider.

Popular posts from this blog

April 27, 2018
I can't tell you how many miles I've spent following those broad shoulders.  For nearly every challenging ride that I've done over the past 15 years there has been one constant, sucking Dayton's wheel.  He's got a big motor and pushes through the wind.  I tell jokes and keep us on course.  We're a tandem team that forgot to fasten the couplers. In February 2016 that changed in the time of a pedal stroke.  While riding a 200k permanent midday in Johnston County four NC randonneurs were plowed down by a 1992 Crown Victoria.  Mike Dayton hit the windshield and sustained life changing injuries.  He spent time in a coma and was ventilator dependent for a week.  His recovery continues today and the reminders are all around in his house.  Dots and a stick are taped to the walls and lines are on the floor for balancing and vision exercises.  He now wears corrective glasses so that he doesn't see two of everything.  He and Kelly have been through a lot in these p
20 comments
Read more

Return to the Nebraska Sandhills 1000k

June 12, 2018
A few days before the start of the Sandhills 1000k I checked my iPhone weather for Broken Bow Nebraska. The start day would be hot, near 90. The finish day would be cooler. The middle day was forecast for wind. That’s it. Just a wind symbol. If you ever ride in Nebraska and see that symbol, watch out.  That's Rando! photo, Denise Giffin This was the second edition of the Nebraska Sandhills 1000k. I rode the first edition in 2016 and loved it so much that I blogged about the ride and then that was picked up for a story in American Randonneur. The publicity did not translate to oversubscription. 8 riders attended the 2016 ride and 7 toed the line for 2018. The veterans included myself, the RBA host, Spencer Klaassen and homegrown cornhusker Rodney Geisert. The always popular Rick Blacker flew in from Olympia WA. Brian Feinberg from SFR came based on a suggestion from Robert Sexton who had thoroughly enjoyed the 2016 edition. Bill Giffin took a break from his nearby
3 comments
Read more

September 06, 2018
Coal fired ship meet fixed gear randonneur.  http://www.ssbadger.com/about/history/ If you ever find yourself in Manistique in the Upper Peninsula at Marley's Bar and Grill and the special is a walleye sandwich, get it.  This was the exact situation that we found ourselves shortly before midnight on day 2 of the inaugural Mac and Cheese 1200.  My riding buddies Spencer Klaassen, Mark Thomas and Ian Hands and I went all in on the walleye special, and we did not regret it. The Mac and Cheese was a massive cooperative undertaking of the Great Lakes Randonneurs and the Detroit Randonneurs, led respectively by Michele Brougher and Jeremy Gray.  Their task seemed daunting but they handled the chaos with aplomb.  The first interesting task was to move most of the 63 riders across 50 miles of Lake Michigan from the finish town of Manitowoc, WI to the ride start in Ludington, MI.  Enter the Badger!  The Badger is a coal fired ferry that was up to the four hour trip and also served a
Post a Comment
Read more
August 18, 2018
My welcome to Ireland Míle Fáilte 2018 Míle Fáilte translates from Irish into a "thousand welcomes."  It might as well mean a million welcomes! The Irish are the most welcoming people that I've ever encountered but we weren't there for a thousand welcomes, we were there for even more. We were there for 1,200 welcoming kilometers of Irish southwest countryside or should I say 1236 to be precise.  When things were going well we were enjoying the 2018 Míle Fáilte.  When we were suffering it was simply the MF1200. 2018 full course 1,236 km 11,205 m / 768miles 36,753' Every ride has its challenges. We knew about the hills from the course profile and we had heard about the rough road surfaces and the midge swarms but there was no thought given to dealing with record high temperatures.  They hardly sell sunscreen in Ireland.  The Irish claim to have thrown out more sunscreen than they've ever used.  My arms are still peeling. This was the secon
Post a Comment
Read more